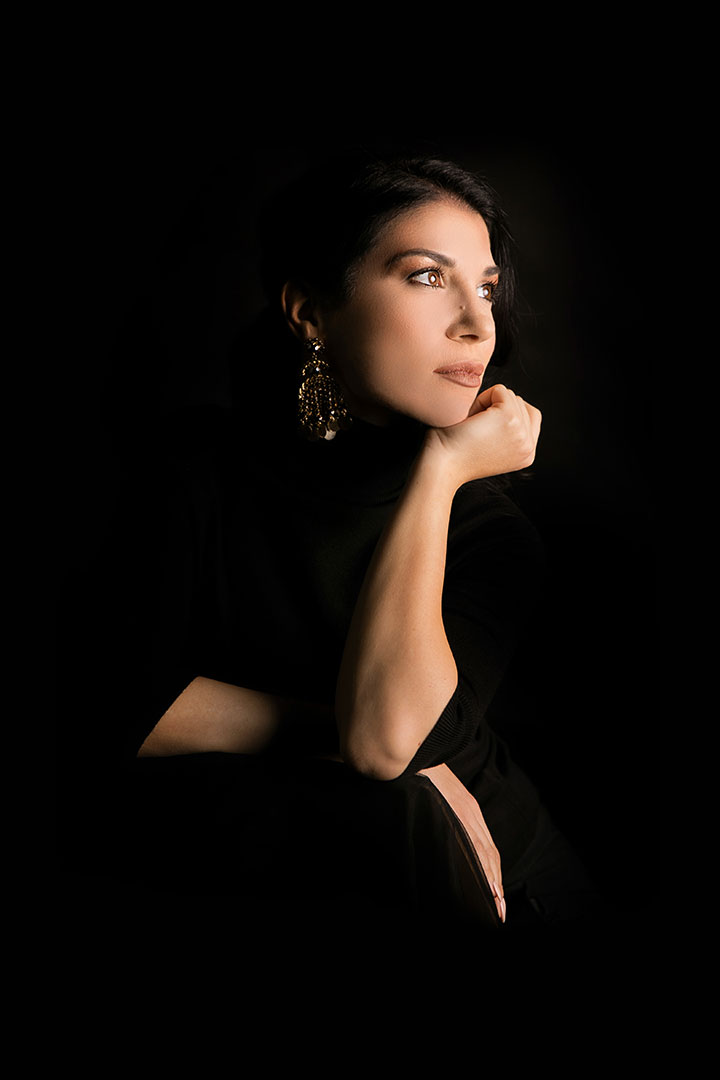 "There are magical encounters in childhood, encounters that a child's sensitivity can transform into destiny”

Claudia Pavone states herself to the public through her artistic sensibility and caleidoscopic voice, rich in nuance and interpretative depth. They say that life sometimes knows how to be magic, if we’re able to seize those little alchemies, that are created in the most unimaginable moments. Just like that, with the innocence that only a child truly has, at the age of four, Claudia falls in love with the sound of a piano, that echoes in that home where she lived her childhood. The love for music and for singing marks her destiny, her delightful voice quickly becomes part of the Pueri Cantores white voices choir of Vicenza, where she experiments study method and discipline, those that will make her the brightest star of Lyrical singing.

Graduating with honours at the Agostino Steffani conservatory at Castelfranco Veneto, she soon starts to win many of the most prestigious national and international opera contests. The encounter with maestro Riccardo Muti, who takes notice and casts her for the role of Violetta in Giuseppe Verdi’s La Traviata concert, marks, not only her official debut in the opera world, but also her special bond with her character, Violetta Valery. Claudia performs La Traviata gaining great consensus from the public and the most prestigious Italian theatres critique: La Fenice Opera House, Il Maggio Musicale Fiorentino, the Teatro dell’Opera in Rome, Naples’s San Carlo and the Massimo Bellini in Catania, directed by Maestri Ivan Ciampa, Sebastiano Rolli, Stefano Ranzani, Jordi Bernacer and Francesco Lanzillotta. We shall mention in particular the Traviata co-produced by the Theatres of Reggio Emilia foundation, the Teatro Comunale Luciano Pavarotti and the Theatres of Opera Lombardia, with cinematographic direction of Alice Rohrwacher, in collaboration with Miuccia Prada in the creation of stage costumes and the Traviata created with Sofia Coppola’s direction and Valentino Garavani costumes in Rome’s Teatro dell’Opera.

Claudia also quickly debuts in other remarkable roles: Gilda in Verdi’s Rigoletto (remembering the seasonal inauguration of Rome’s Teatro dell’Opera, with maestro Daniele Gatti and direction from Daniele Abbado, and the enactment at the Sferisterio for the Macerata Opera Festival, with maestro Gianpaolo Bisanti’s direction) ; Adalgisa in Bellini’s Norma ; Adina in L’Elisir d’amore of Donizetti (remembering the original direction of Victor Garcia Sierra, inspired by the “il Circo” series by Fernando Botero); Fiordiligi in Così fan tutte ; Donna Elvira in Mozart's Don Giovanni (we can recall the version with the direction by Damiano Michieletto and Jonathan Webb) ; Liù in Puccini’s Turandot ; Michaela in Carmen from Bizet (we recall Calixto Bieito’s cinematics with the prestigious direction of maestro Myung-Whun Chung) ; “Gifted with a voice of stunning beauty” (GB Opera Magazine) Claudia, other than her exhibitions in the most famous Italian Theatres, also, debuts in France at the Opéra de Rennes, tours in Germany and Japan, tours in Spain at the Teatro Pérez Galdos in Las Palmas, performs in China at the Shangai Grand Opera House, and also in Russia at the Saint Petersburg Palace Musical Festival and in Australia’s Sydney Opera House.

In 2020, after the emergency Covid-19 lockdown once theatres began operating again, she plays as the protagonist in a series of summer evening events: The Revival Concerts, or Concerti Della Rinascita, were created to relaunch Opera in the Venetian region. In that time she’s also collaborating with Riccardo Zanellato at the opening evening of the Festival di Rovigo Cello inside the atmospheric Tempio della Rotonda. Subsequently, Claudia took part in the commemorative 1600 years anniversary concert organised by the Venice foundation in Piazza San Marco with the Fenice’s orchestra and choir, under the direction of the maestri Riccardo Frizza and Daniele Callegari.

Violetta Valery is the character, that once more marks an important and symbolic change, that represents a sign of revival in the Opera scene of the grand Teatro La Fenice di Venezia. This Traviata is in fact created in semi-scenic form under the guidance of director Christophe Gayral and the musical direction of maestro Stefano Ranzani. Towards the end of the year Claudia Pavone plays the protagonist of one of the four live-streamed concerts, organised by Rovigo’s Teatro Sociale, in which she ventures for the first time in the belcanistic repertoire, homaging the great Catanese composer Vicenzo Bellini. She performs for scenes from the operas Il Pirata, I Puritani, La Sonnambula e Norma, executing some of the most dramatic and vocally complex moments in the Opera world.